In 1990 we had a very strong male Kendo Team in the NKR, and they won 2nd place on the European Kendo Championships in Berlin. Sergio Velasquez even won the male individual championship, the first time a male Dutch Kendoka won a major tournament.

In 1990 I invited Edo Sensei to come to Amsterdam again. 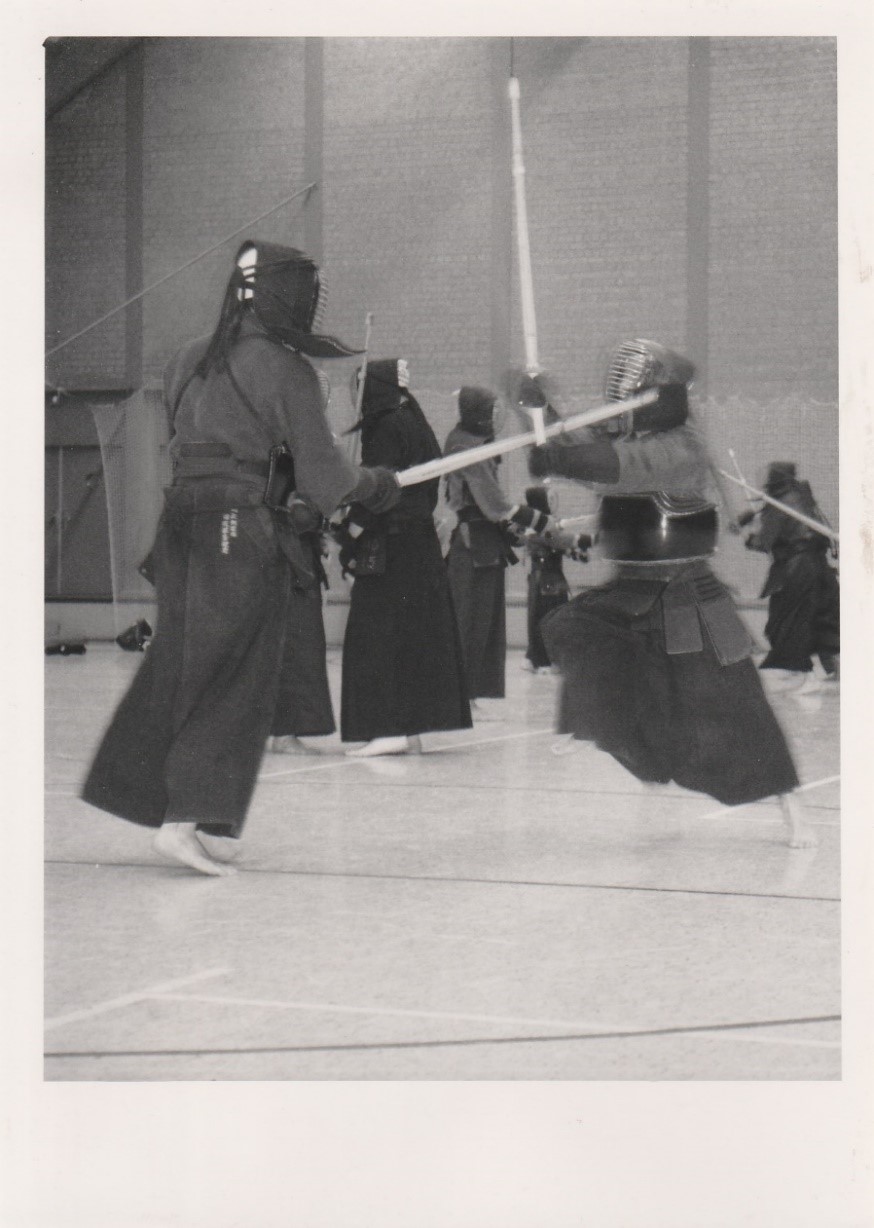 The first Iijima Cup of 1990 was also my last Kendo Tournament as a player. By this time I was 31, and at the end of my career as a Shiai player. It wasn’t much of a career anyway, but the results that Jolanda was still obtaining in Kendo Shiai was satisfying enough for me. The younger generation, such as Sergio Velasques and later Mark Herbold were gaining strength, and they were much better athletes than me. However, I still felt obliged to Iijima Sensei to join the first Iijima Cup Tournament, and I fought the best way I could. I beat Sergio in the final, which was no small feat, considering the fact that he was the European Champion!

In the late 1980’s I started to focus more on teaching and refereeing in Kendo tournaments. I also started my career at Nippon Express in 1988, which meant I could not train for Shiai as much as would be needed to get high level results.

In 1991 I joined the World Kendo Championships as a referee. Although I was still a 5th dan, they selected me to referee the quarter final. This was the start of my long career as a WKC referee. After the tournament I challenged my 6th dan, and I was the only candidate out of a group of 19 who passed. Jolanda was at her peak of Shiai Kendo, and she made it to the best 8 of the WKC. It would take more than 20 years until another Dutch female (Sayo van de Woude), would achieve the same result. 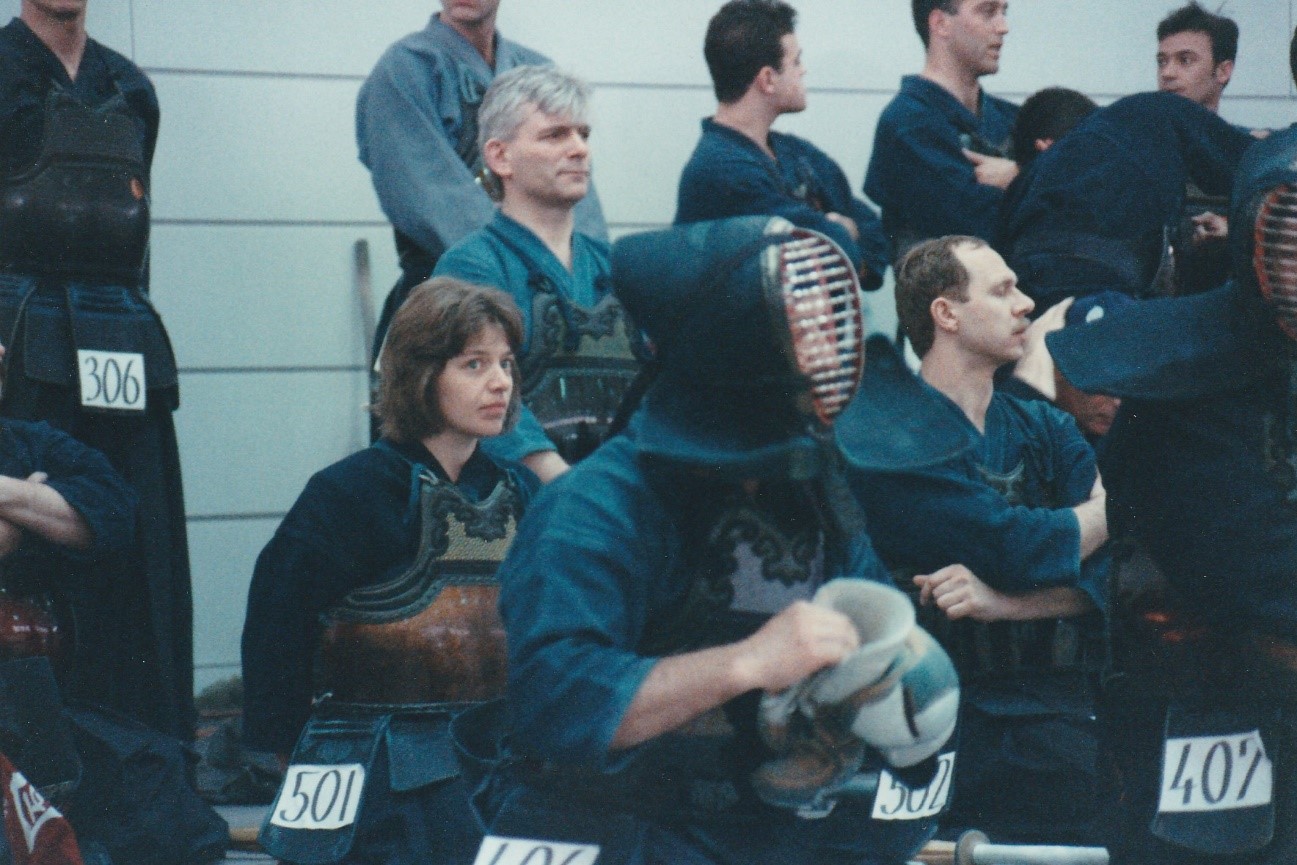 Look at Jolanda’s focus before the grading 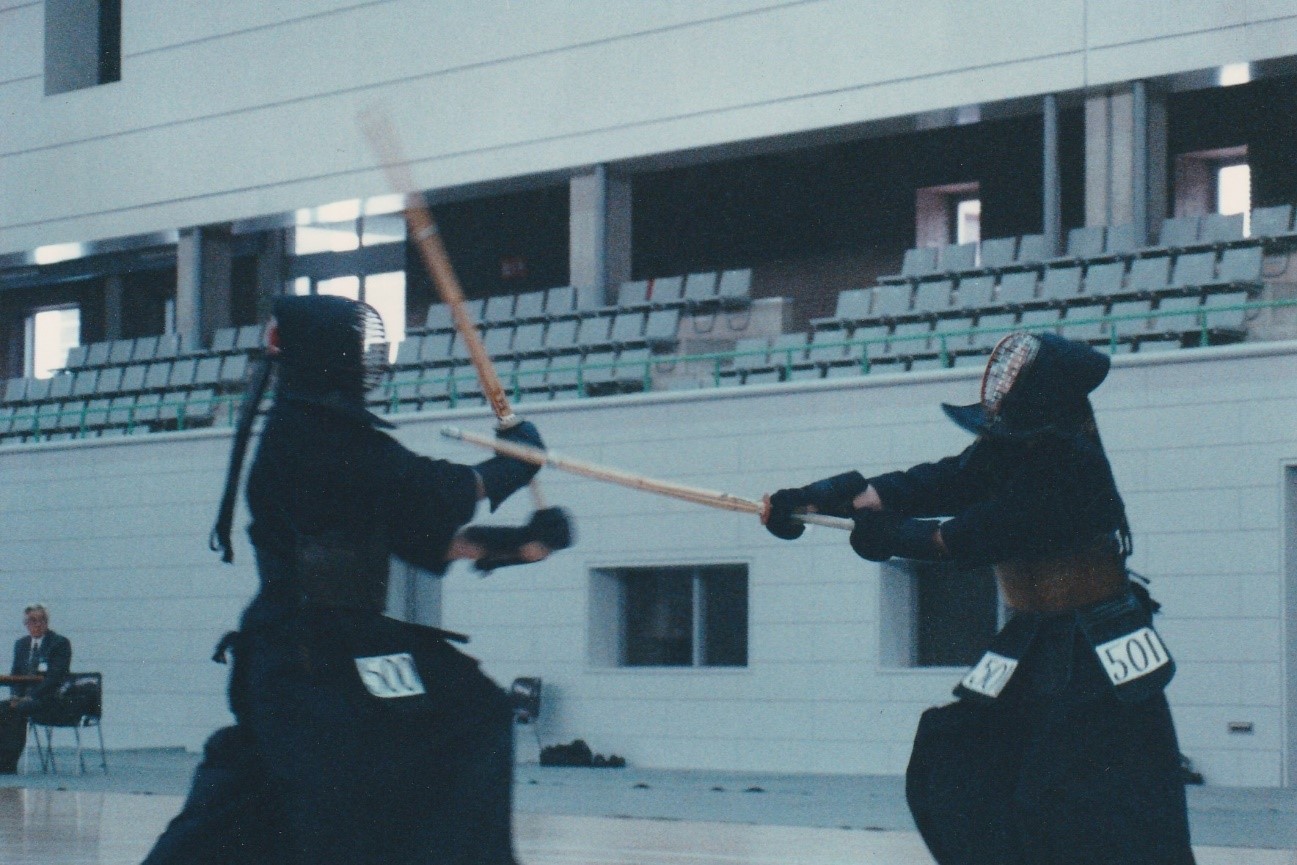 Any doubt that Jolanda was the best 5th Dan in Europe at this time? 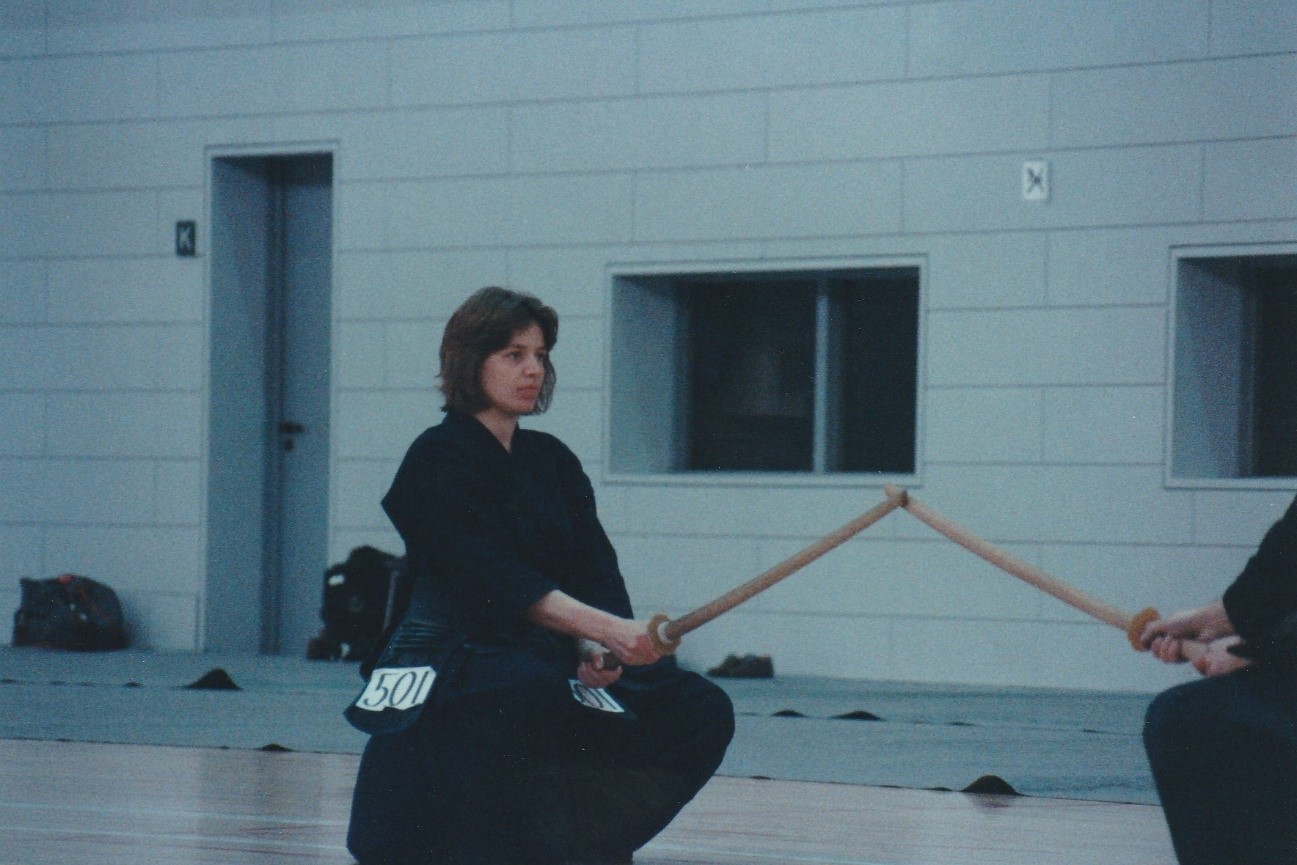 Of course she also excelled in Kendo Kata! 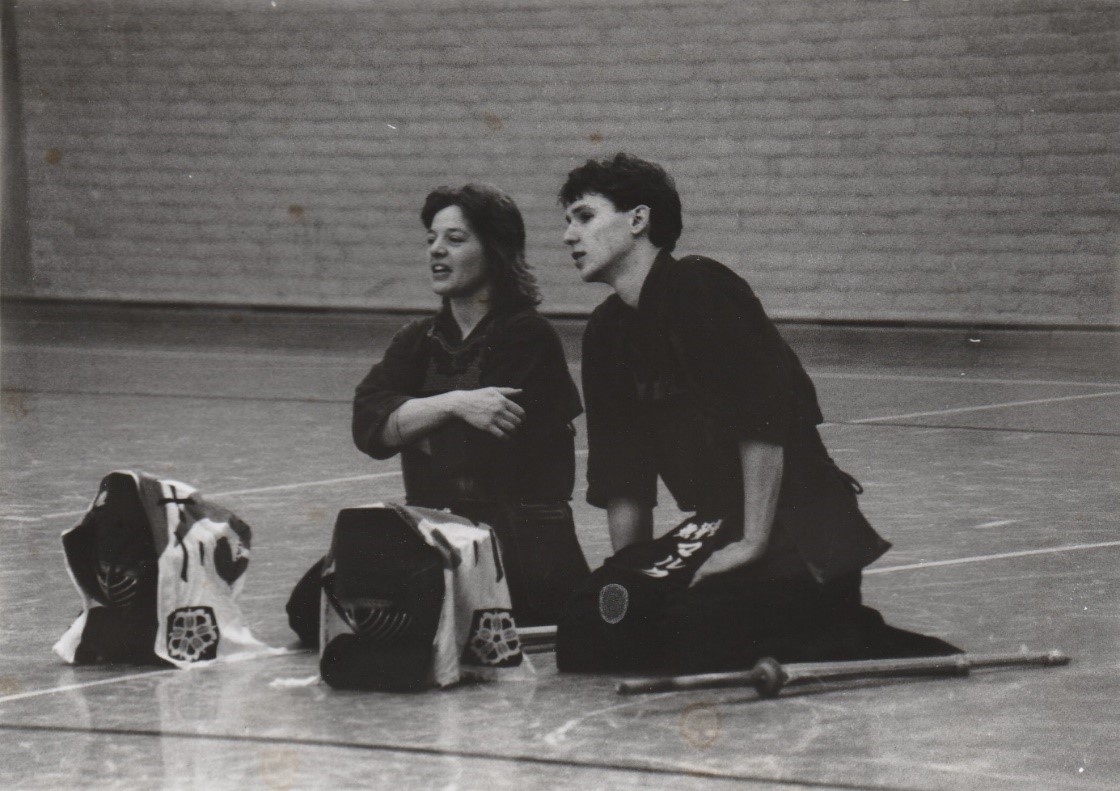 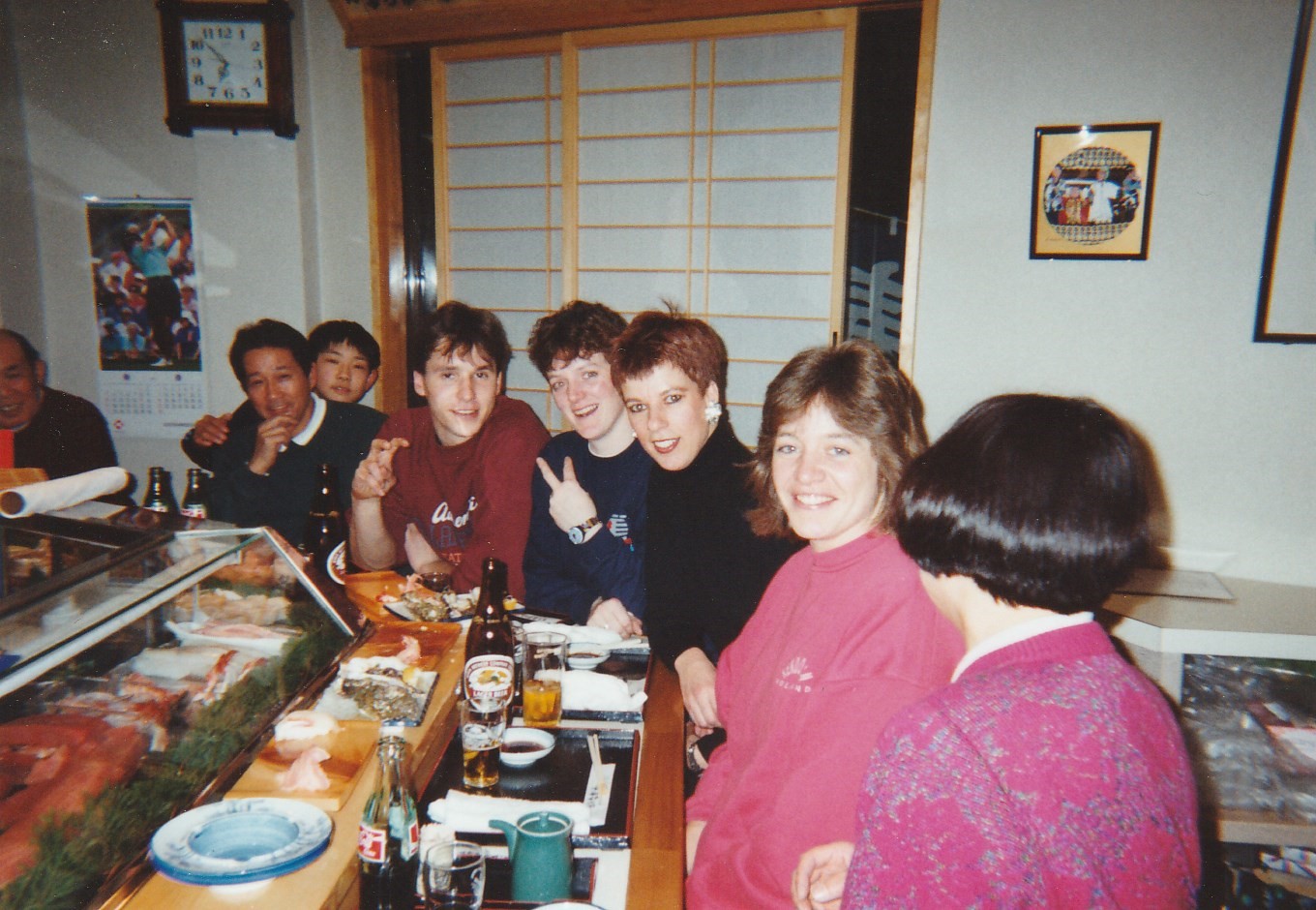 In 1993 Mark, Jolanda, Thea and Anita spend a few weeks in Japan

Iijima Sensei was also the coach of the Dutch Kendo Team for a few years. 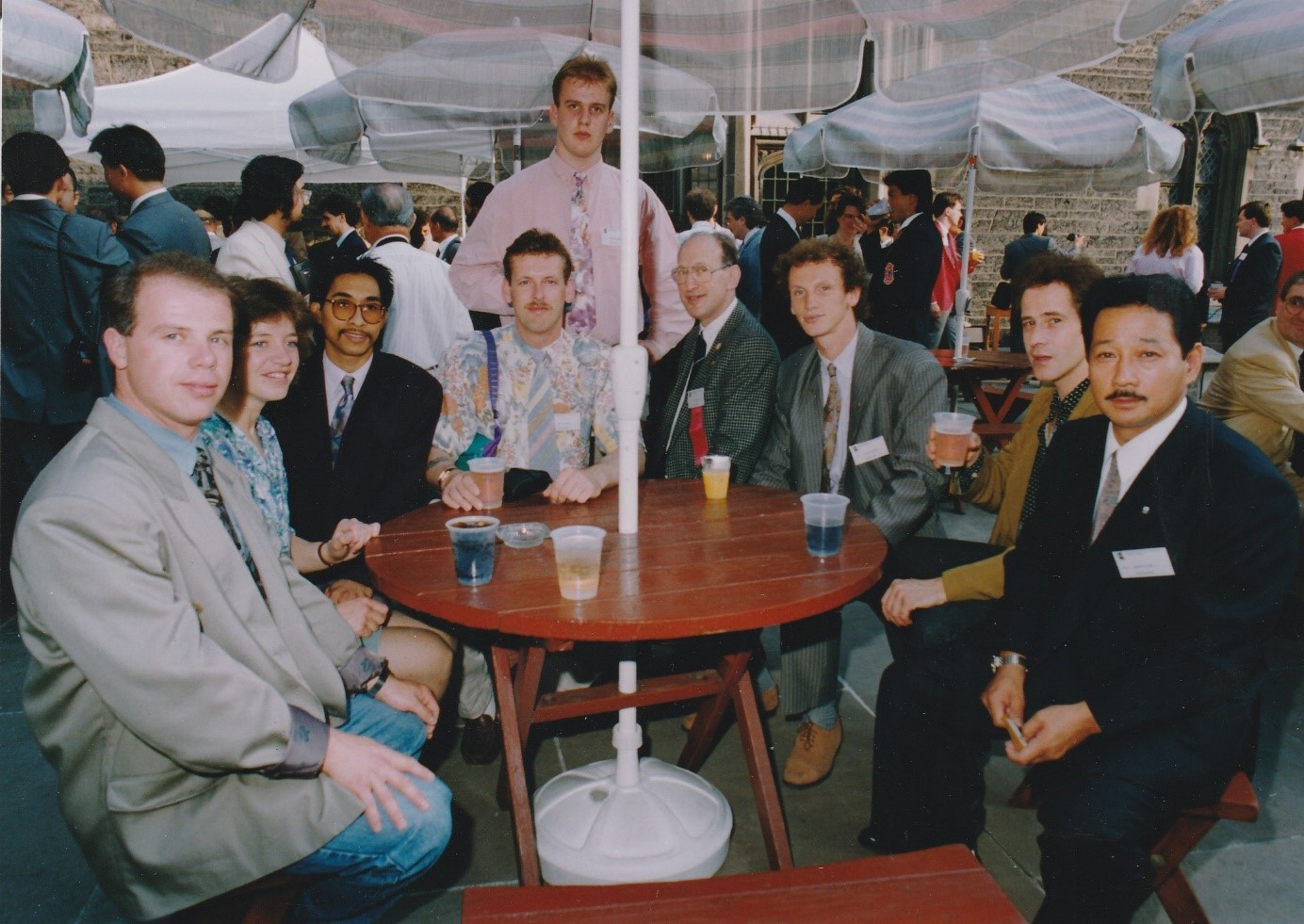 Who is that Japanese with the mustache? Trying to copy Louis? And Rene Bonne (far left) with hair! 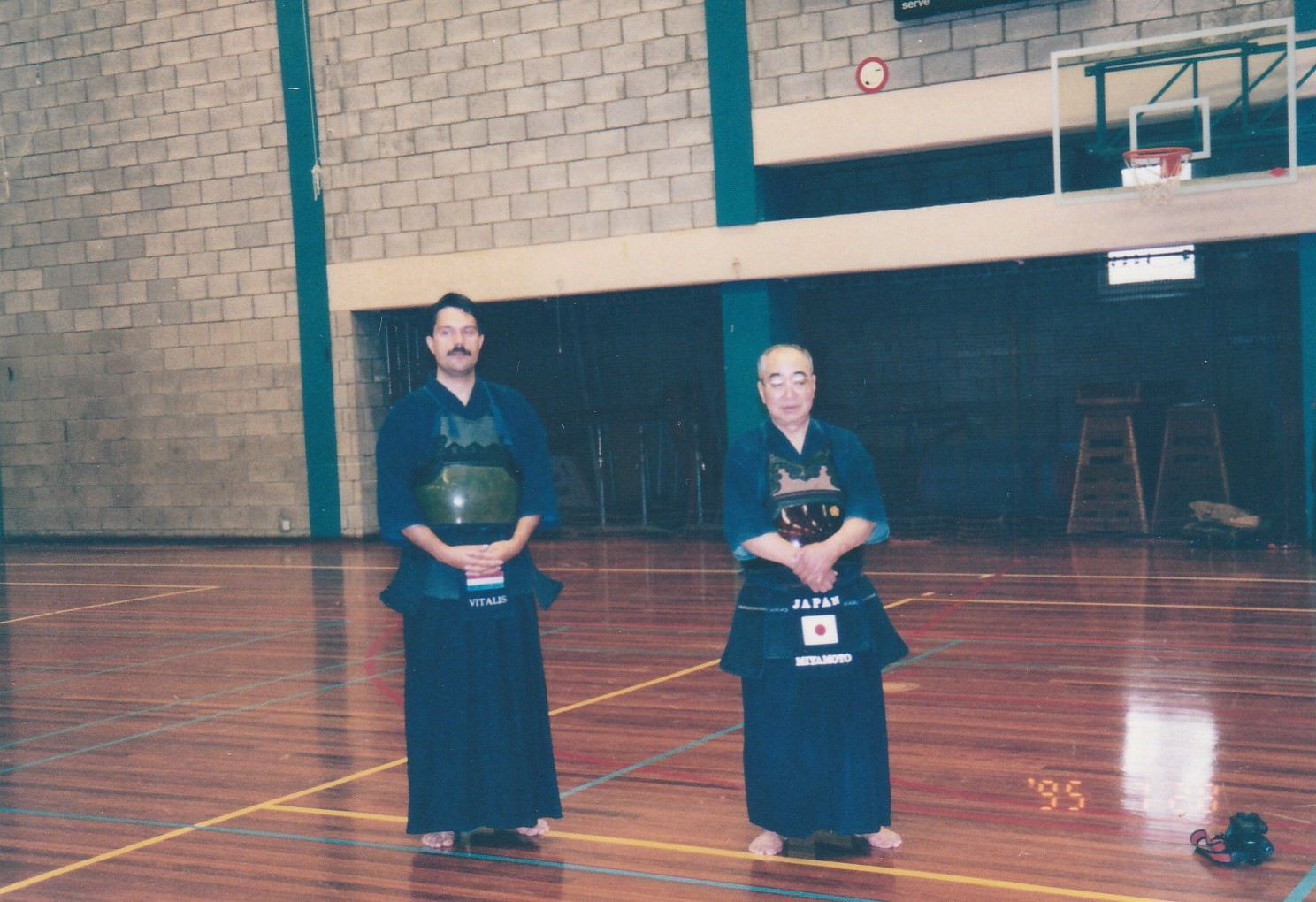 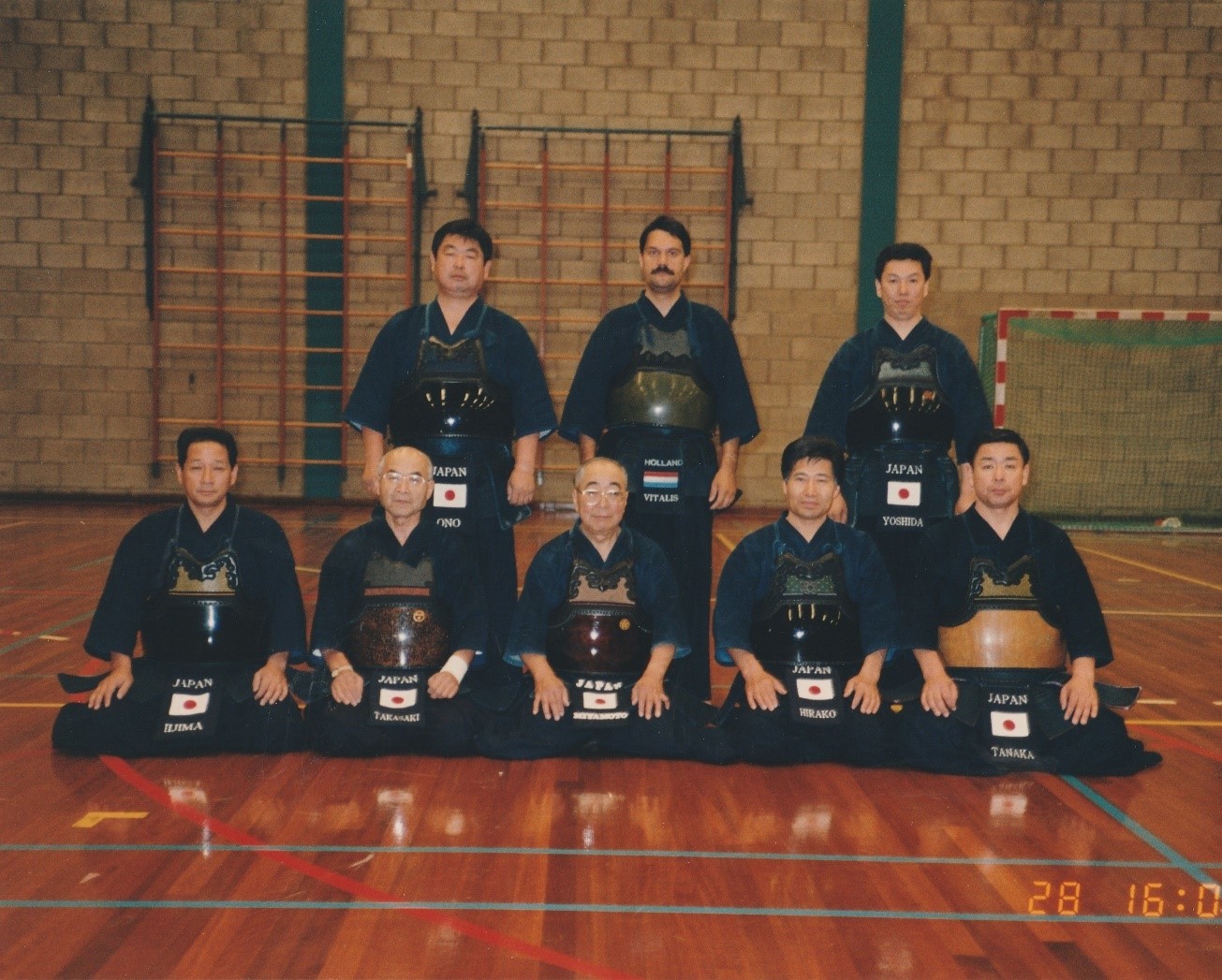 In 1995 we organized a seminar with high ranking Sensei from Ibaraki. The late Miyamoto Sensei (Kendo 8 dan Hanshi) was leader of the delegation. Takasaki Sensei is still active now, even in his mid-nineties!

On the WKC of 1997, my student Wing Tan and Jolanda both won a fighting spirit prize. I was referee at the Men’s Final, and for the coming years I would be selected as referee in the finals of the WKC. 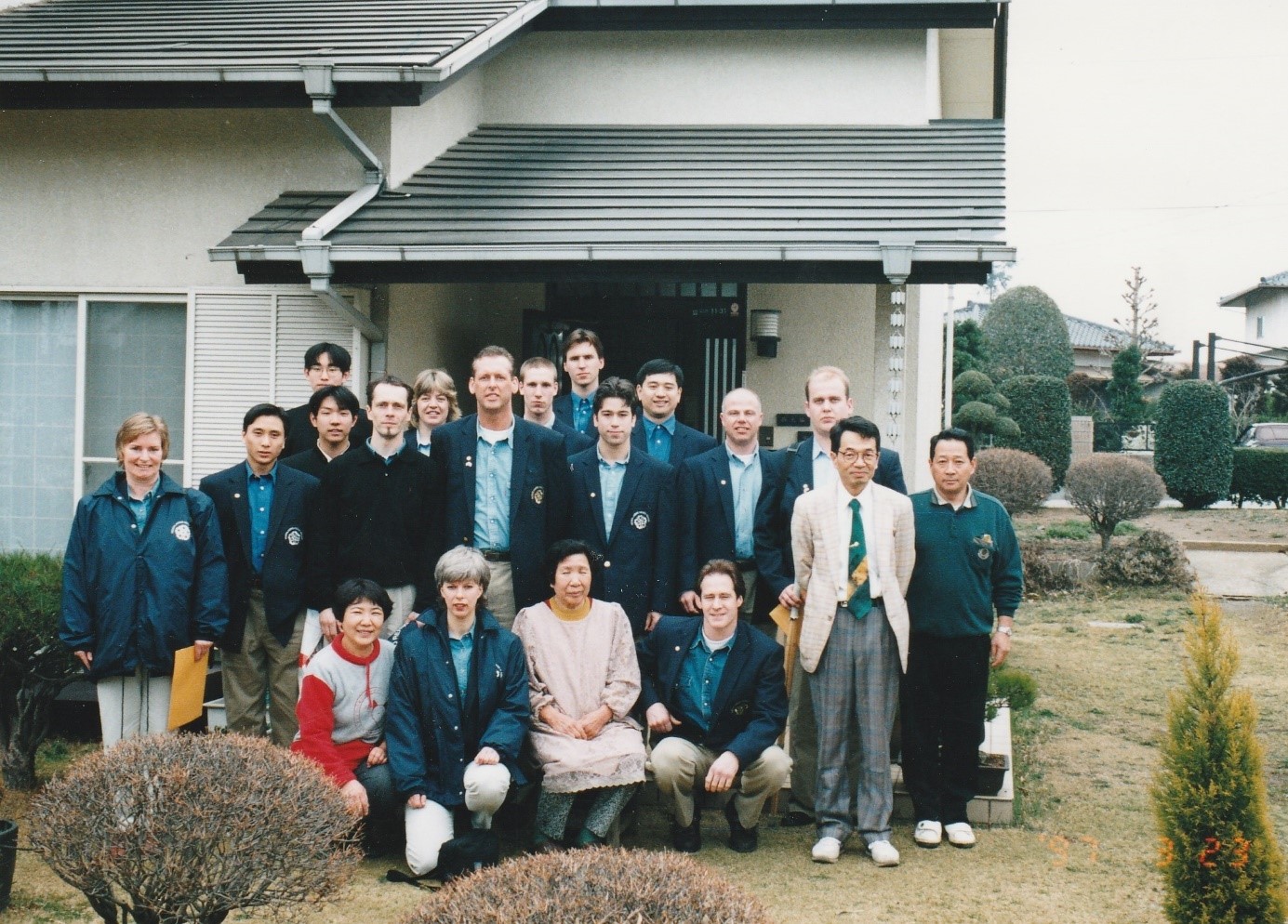 The Dutch Kendo team of 1997 in front of Iijima Sensei’s house.

During one of Sensei’s many visits to the Brussels Winter Seminar, Sensei was doing jigeiko with Jo. There were dozens of other Kenshi lining up in front of Sensei, but Sensei was having so much fun training with Jo, that he completely forgot the time and the Keiko lasted many minutes.

Finally, Hirakawa Sensei came over and told Nakakura Sensei to stop training with Jo and give the other Kenshi a chance as well! 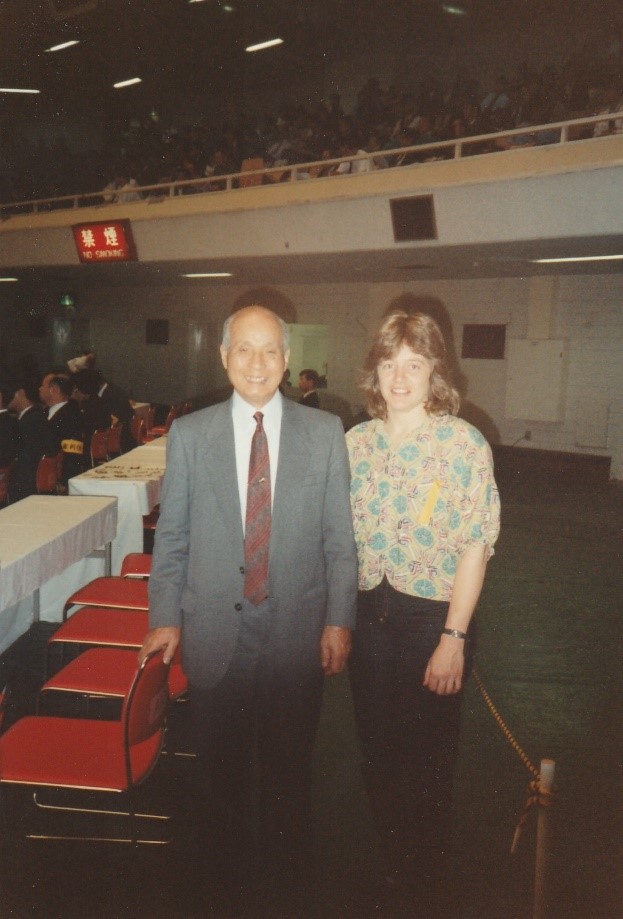 At the end of the 1990’s, the EKC had grown to a really big tournament, and of course the level of Kendo in Europe was getting much better across the board as well.

In 1998 my student Mark Herbold became the second Dutch male to win the EKC. Jolanda made it to 2nd place, but by this time she was already 40 years old. Still only few females in Europe could beat her.

One year later Mark was in the final of the EKC again, and this time he got 2nd place.

In 1999 Jolanda and I made a big decision in our life: we moved to Japan, where I could get a job as an expat employee for my company. This was the start of a 7 years period in which we were not in The Netherlands, and my students had to take over the teaching and training, both in the NKR and in the Museido Dojo. 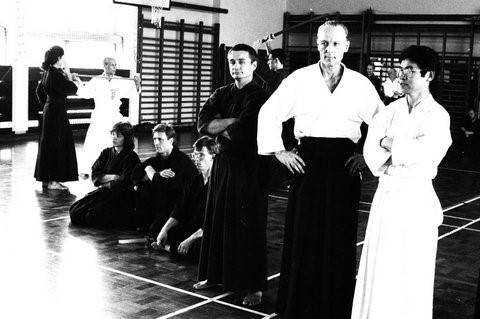 1990 Summer Seminar UK (Hendon): Who can you recognize? 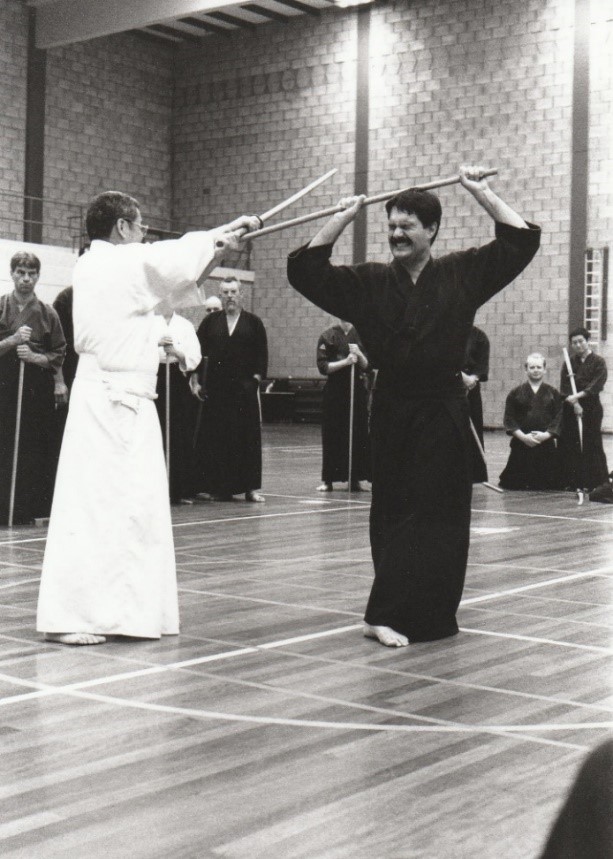 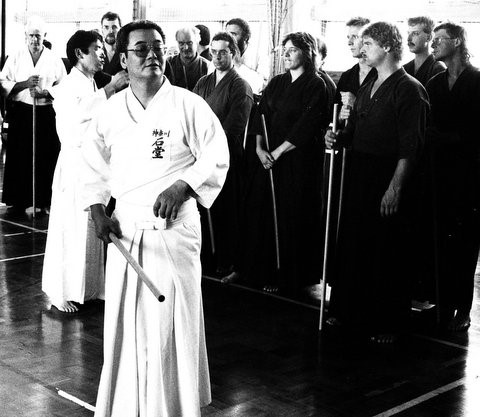 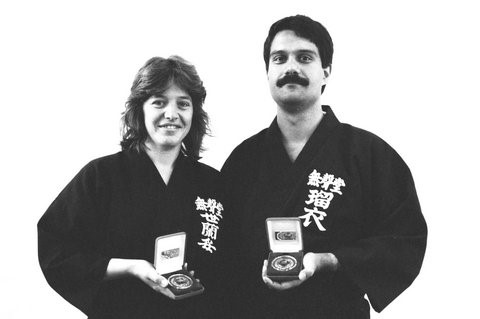 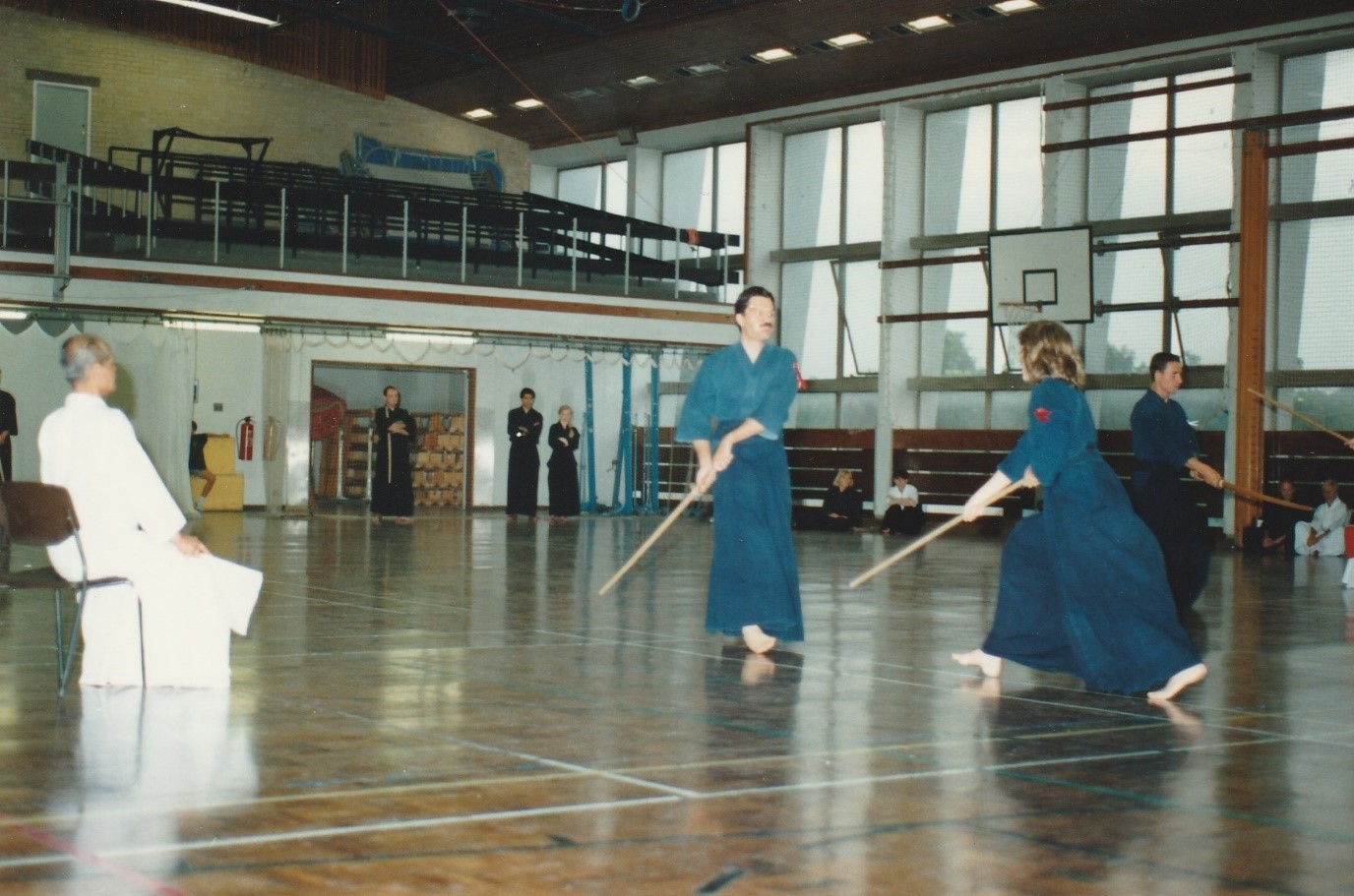 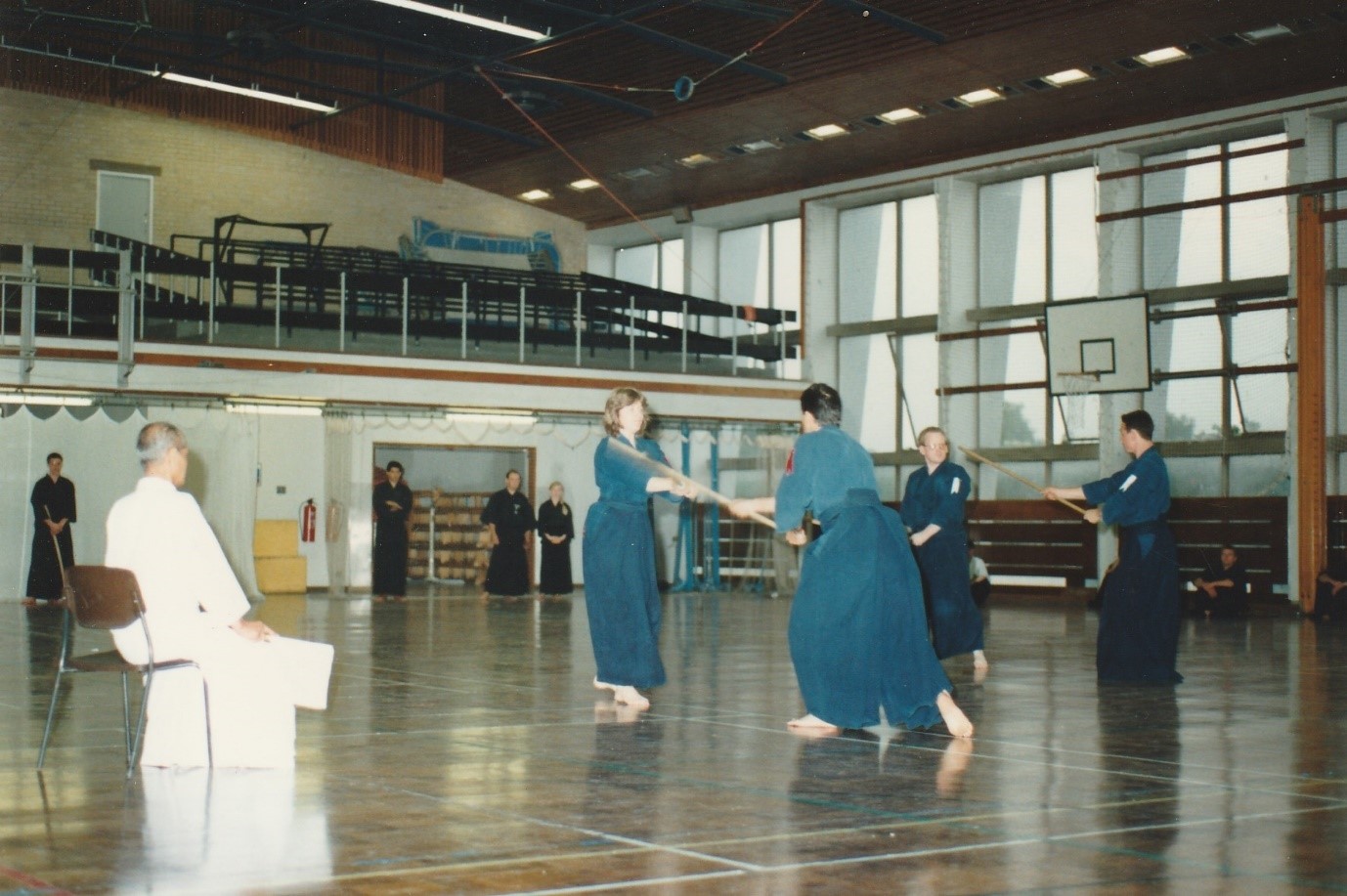 Ishido Sensei taught us the Muso Shinden Ryu of Iaido, and we even had a Tachi Uchi no Kurai Seminar in Museido Dojo in 1992. The video that was taken of that Seminar is still the reference material for this. 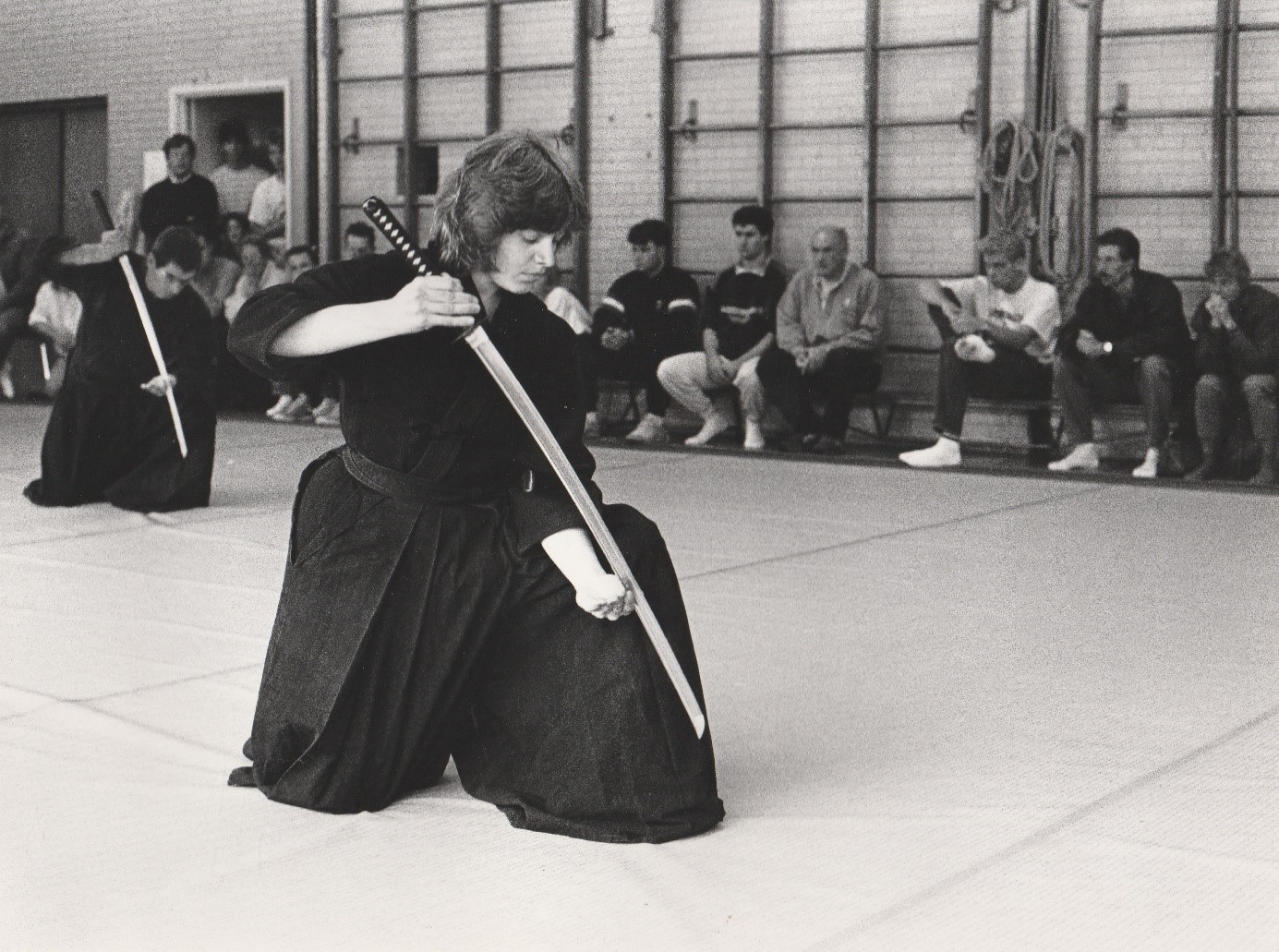 The Beauty and the Sword 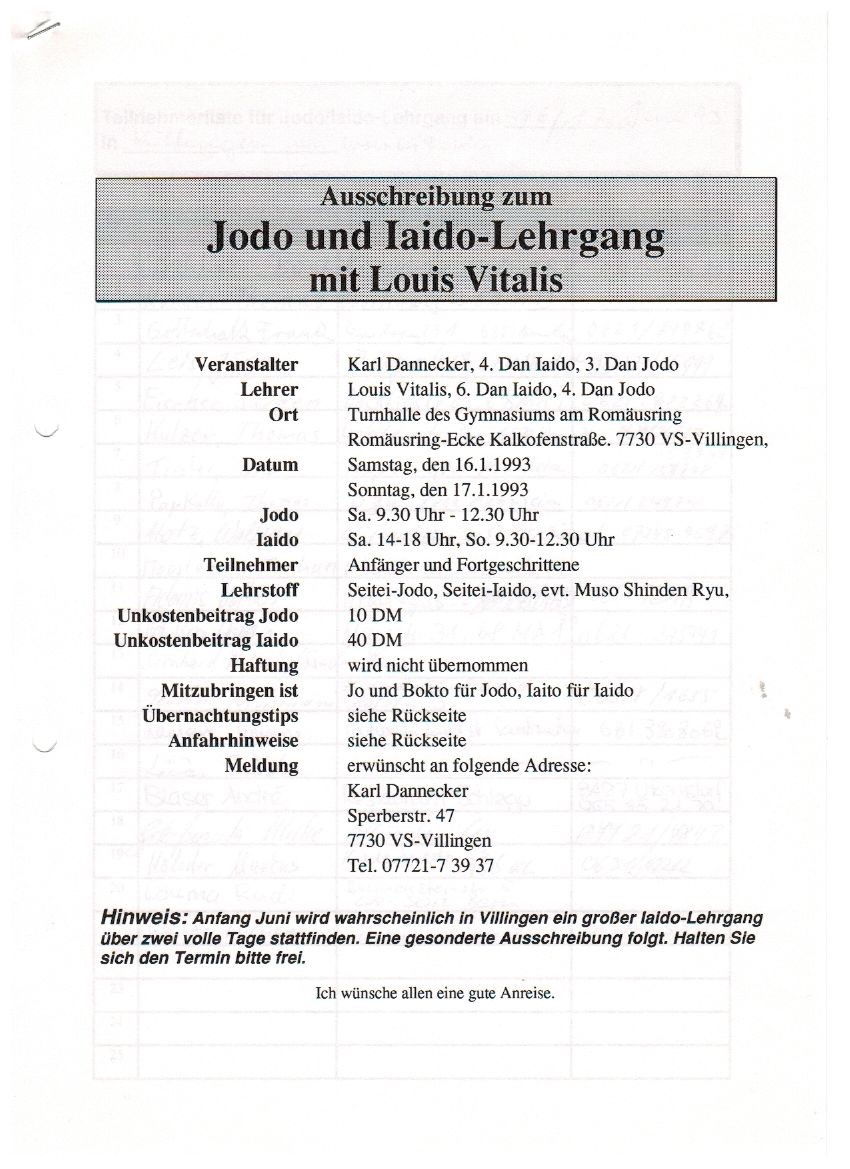 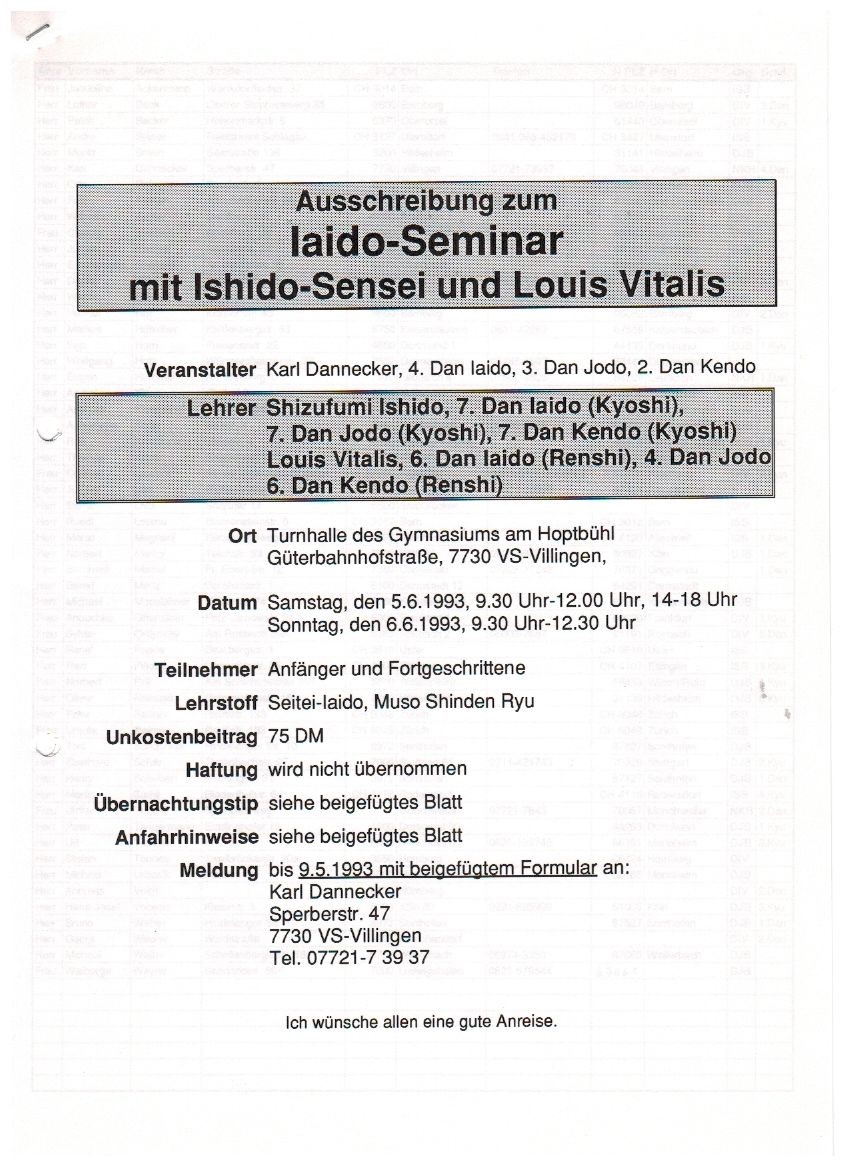 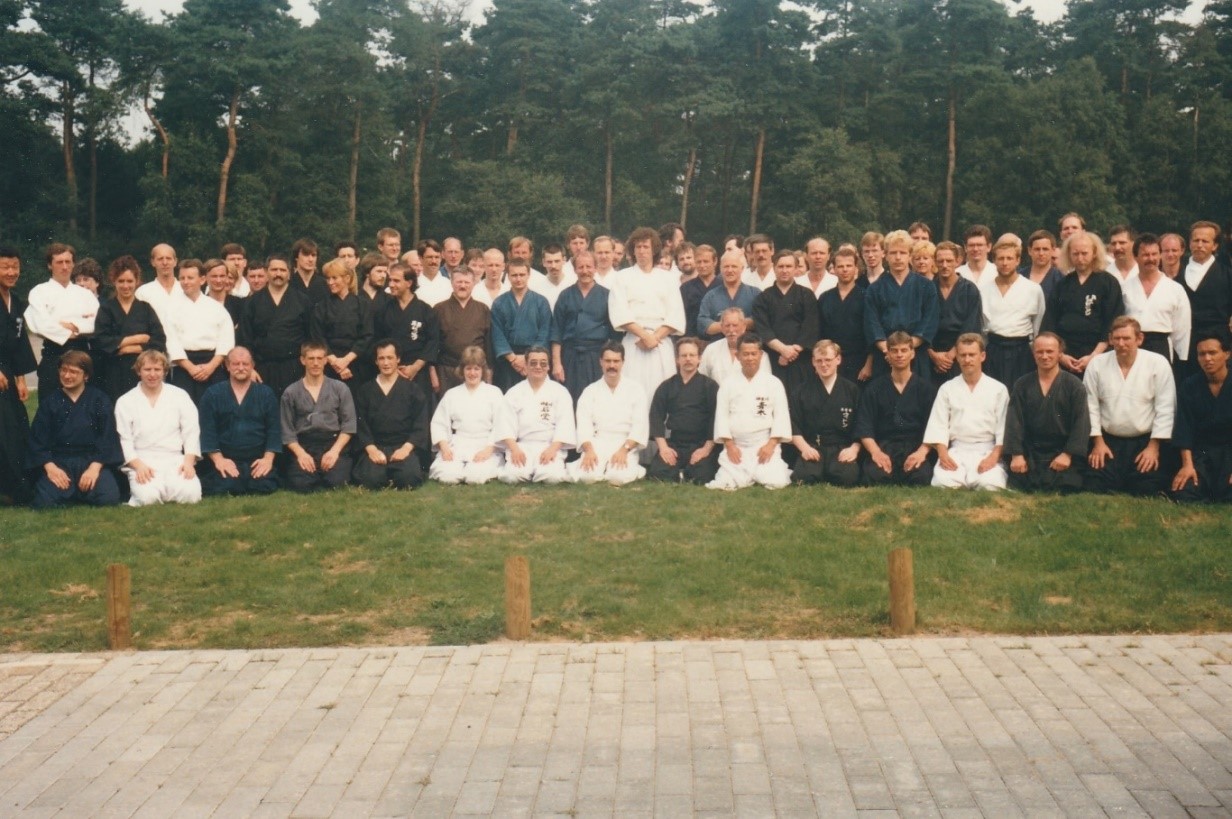 The Iaido Jodo Seminars in Holland grew into major events 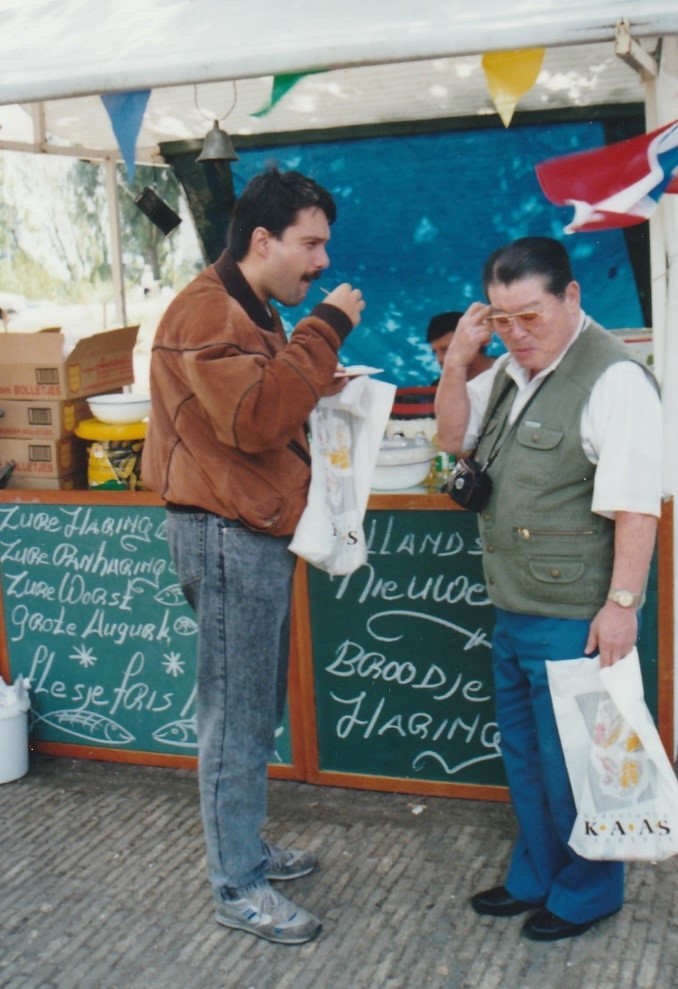 Ishido Sensei, Jock and I had one big dream: European Championships in Iaido and Jodo.

Although we had already organized international tournaments in both disciplines in The Netherlands and UK, it took till 1993 for the first European Iaido Championships to be organized.

It would take until 2002 for the first European Jodo Championships to be organized. 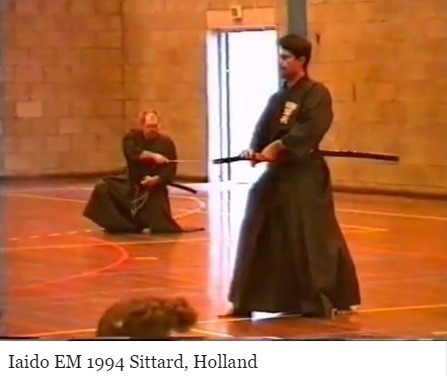 Jock and Louis doing Embu at the Iaido European Championships 1994

By now these events are very well established, but in the 1990’s it took a lot of effort to get these tournaments officially organized within the EKF. Because the NKR was able to take care of the organization, we could prove to the EKF that it was worthwhile to do these tournaments.

In 1998, at the age of 38, I passed my 7th Dan Iaido. Of the more than 200 participants on this grading, I was candidate A1: the youngest of all. Thanks to the great support of Ishido sensei in the preparation of the exam (Jock and I trained like madmen for 6 hours a day in Sensei’s Dojo) and his support in the background, I was able to make a good performance on the grading. Jock also passed 7th Dan Iaido at this exam.

Unfortunately by the time of the grading my knees were already getting painful, and when I had to get an operation on my elbow I had to give up Iaido completely.

I’m still very grateful to Ishido Sensei for his teachings, it made me the first European ever to pass 7th Dan Iaido before the age of 40. Now most of my first generation Deshi are 7th Dan Iaido themselves, and very well qualified to take over the teachings in the lineage of Ishido Sensei.

Also, Ishido Sensei started to invite Sensei from other Ryu to join the Seminars: Jikiden, Tamiya and Shinkage followers own a lot to Ishido Sensei for bringing the very best Sensei to Europe. Without Ishido Sensei’s open mind to make Iaido accessible for other Ryu as well,  the development of Iaido in Europe would have been much more limited than it is now.

During the Iaido Jodo summer seminar in SIttard, unfortunately Ishido Sensei lost his wallet, with a lot of cash in it. All the students did their best to collect cash as much as possible, so I was able to hand over an envelope when I met Ishido Sensei two months later. 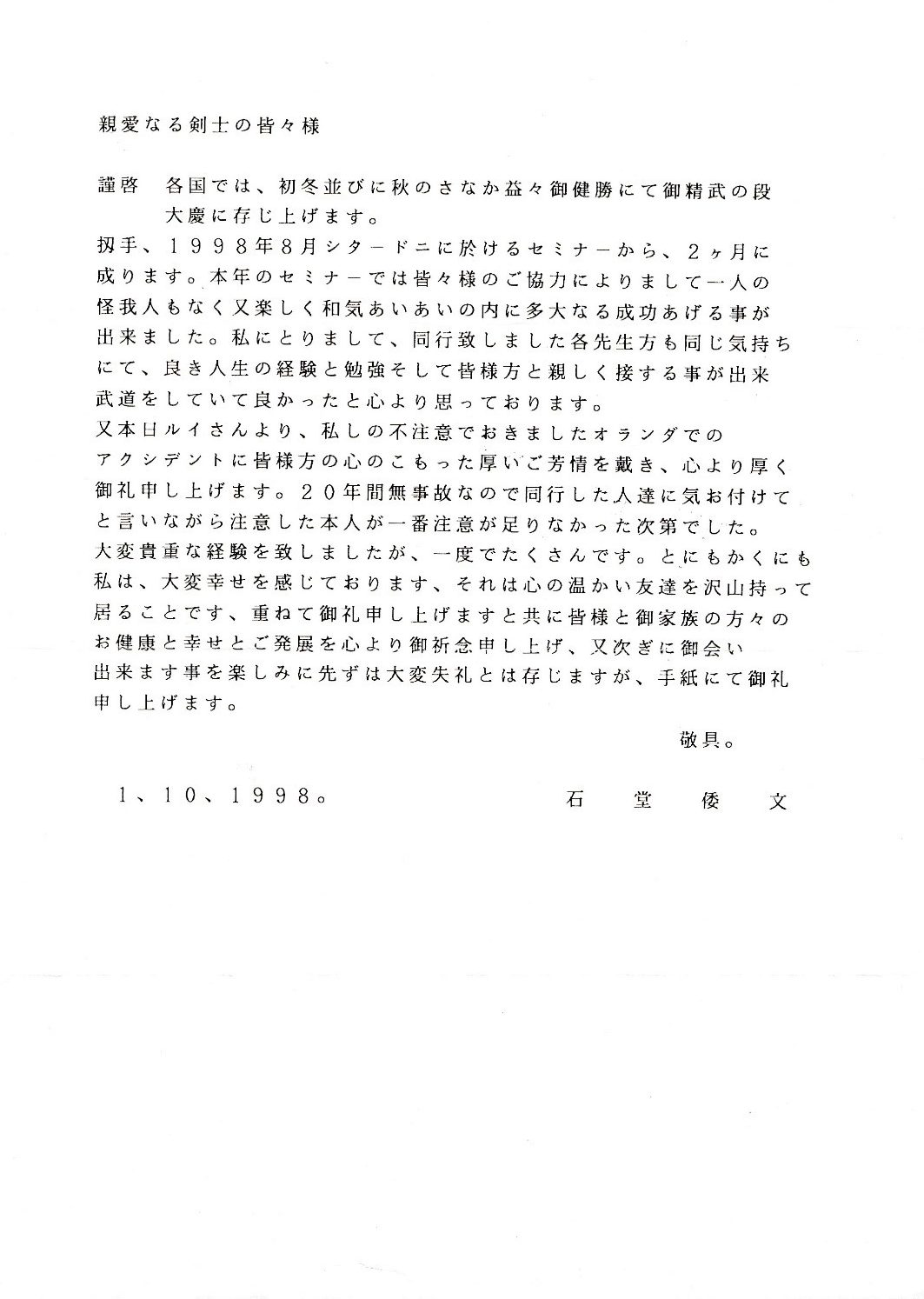 Already two months have passed since the 1998 August Summer Seminar in Sittard. Thanks to everybody, this year’s seminar was a great success, without any injury and in a relaxed and enjoyable atmosphere .

For me and the other teachers who accompanied me, it was a great life experience and study for us, and the great contact that we have with everyone made us all think that we were very lucky to have started Budo. Furthermore, I received from Louis san the support that all of you were so kind to collect, and I want to thank everybody very deeply for this. For 20 years I have been telling my fellow travelers to be careful when traveling, but now it was the one who has been telling this who made the mistake of not paying attention. I really hope this will be a one-off incident.

In any case, I feel really lucky to have so many friends with a warm heart.

I want to thank you from the bottom of my heart and hope you and your family will enjoy continued health and happiness and prosperity.

I think this letter shows clearly that Ishido Sensei not only developed a teacher student relation with many people in Europe, also it has grown into a relation of deep friendship between Ishido Sensei and the Sensei that accompany him and many of us in Europe.

On 17th January 1999 we also organized the first Ishido Cup. 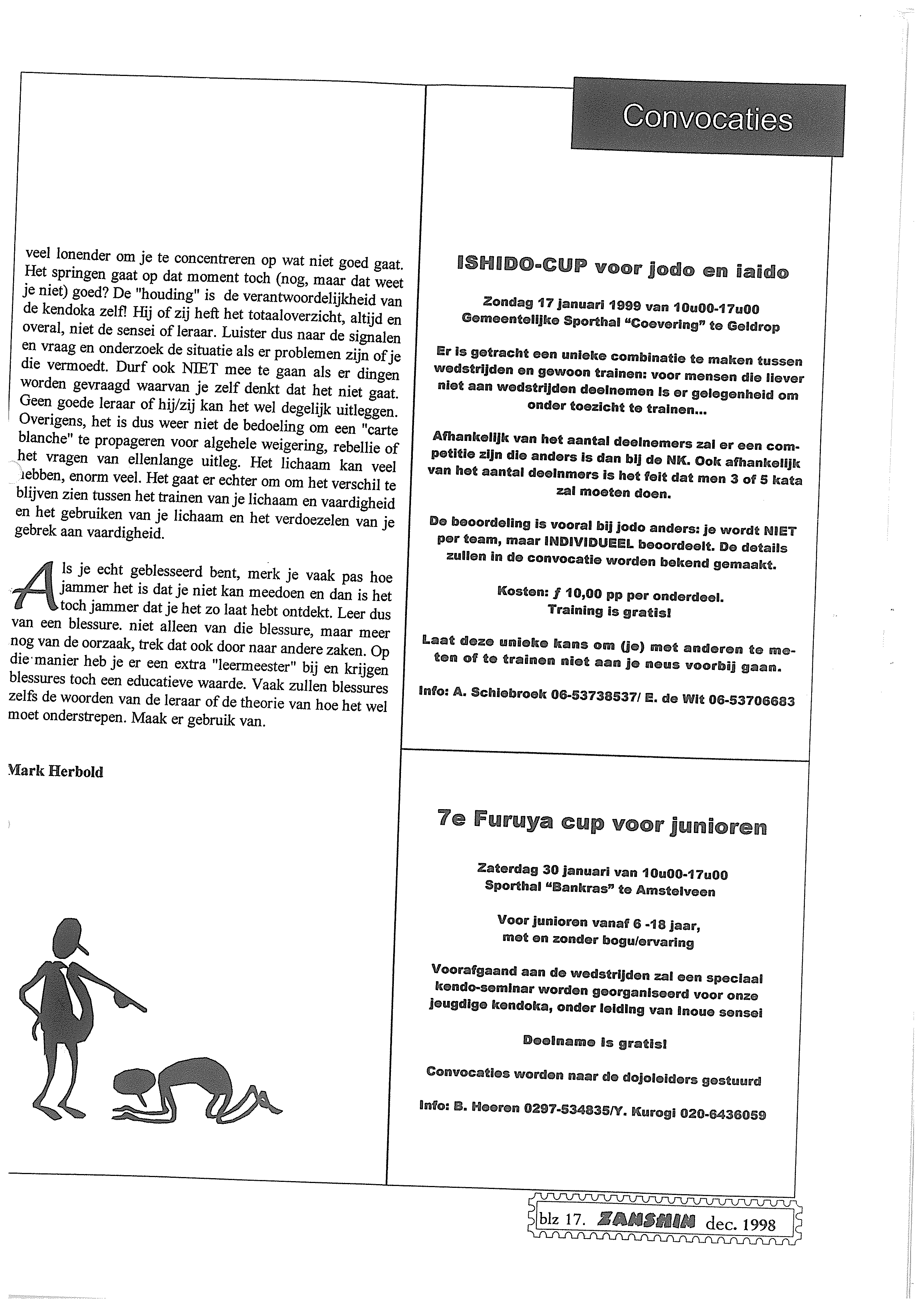 Many years we took Sensei and the group to various cities in Europe, Paris, Venice, etc. 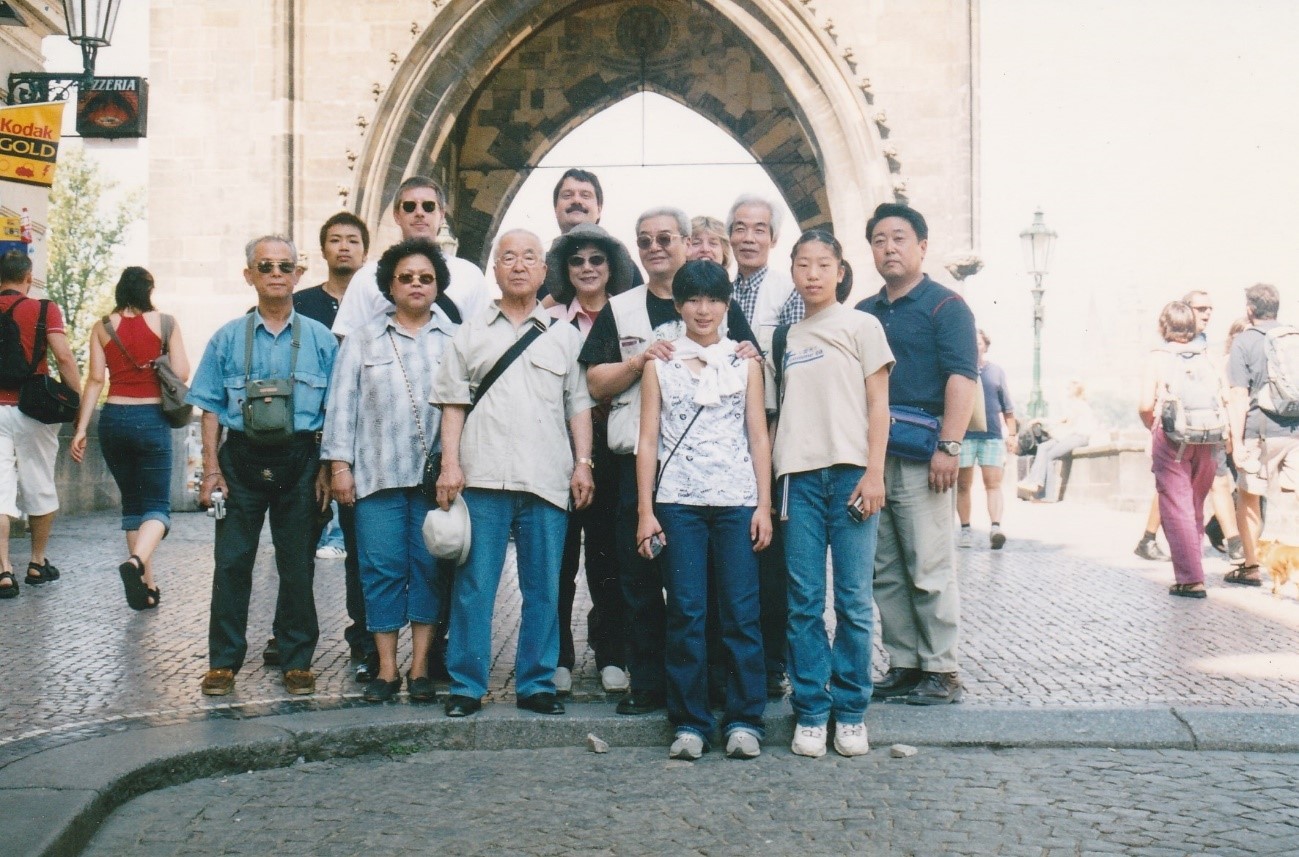 On a trip with Ishido Group.